Home » news » Help for those who suffer in silence

Help for those who suffer in silence

Help for those who suffer in silence

A group of ethnic counsellors have seen their vision for a counselling service for migrants and former refugees become a reality. 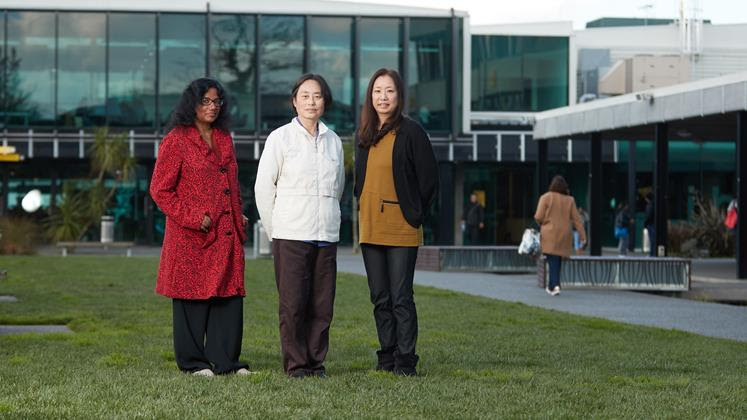 Vanisri Mills, Freda X’ia and Kaoru Tsukigi use their experience of migrating to a new country to help others at Diversity Counselling NZ.

A group of ethnic counsellors have seen their vision for a counselling service for migrants and former refugees become a reality.

Kaoru Tsukigi, Freda X’ia, and Vanisri Mills met at Wintec five years ago when they were studying towards a degree in counselling. It wasn’t the only thing they had in common, all were migrants who had come to New Zealand to settle in Hamilton. Kaoru is from Japan, while Freda is Chinese and Vanisri is from Sri Lanka.

Prior to studying at Wintec, Vanisri had practised as psychiatric nurse but like the others, she wanted to become a counsellor.

“One day I was having a conversation with one of our Wintec tutors, Vivienne Flintoff, and she said that while there were fewer jobs for graduates at that time due to funding challenges, “there’s a place for you”, she really gave me hope for my dream,” says Vanisri.

“We were all graduating as counsellors,” says Kaoru, “and as a group we wanted to do something for our community as ethnic counsellors”.

Vanisri says they all benefitted from the practical training and the shared modules offered by Wintec, as this helped them grow networks with practising social workers.

They also studied English at Wintec’s Centre for Languages.

They formed Diversity Counselling NZ in 2013 along with Japanese counsellor, Kou Kunishige, who is also a New Zealand qualified counsellor.

Kaoru says they had no money “but we had a vision to set up a counselling service for migrants, refugees and international students”.

“We understand their culture and the meaning of being a migrant and we saw the need to offer counselling in their own language.”

The service is filling a gap in New Zealand as the only service that offers a professional counselling service for ethnic people.

“As well as Japanese, Sri Lankan and Chinese languages, we have qualified counsellors fluent in Hungarian, and Korean,” says Kaoru.

The group say that wellbeing counselling is a foreign concept to many in the international community and there are cultural barriers. Kaoru says for many people there can be a stigma associated with seeing a counsellor, while some countries have no counselling system at all.

“In New Zealand, they can often have no one to talk to, and their cultural beliefs may make it difficult to ask for help. We start with explaining confidentiality to gain trust and this can be a challenge in itself, as even the word confidential has different meanings with different cultures,” says Vanisri.

In China, the same word is used for counselling and psychological problems. Freda says this is a significant barrier to people seeking help.

“People just don’t want other people to know, so it’s important we honour this by offering options like home visits and if we can’t go to them, we can use Skype to reach people in other parts of New Zealand,” says Freda.

“People can come to us directly, they don’t need a referral.”

Reaching out is important and they also work through groups and organisations and with families as well as individuals. Since 2014, Diversity Counselling NZ has launched a free family wellbeing programme for migrants and refugees. The programme also provides interpreters and Diversity Counselling NZ have a number of other programmes such as a Breathing Space programme for ethnic children, and workshops for the ethnic community and Chinese and Japanese workshops.

“We often don’t talk when we have a problem,” says Vanisri.

“We smile and our smiles hide what is underneath.”

Find out more about studying towards a qualification in counselling at Wintec.